LAN-party in a box part 2

When thinking of a new case for the LAN box, I wanted to ensure it was easy to setup, and as portable as possible. As portable typically means 'small', it was necessary to consider the heat that would be generated by the computer when it was in use. 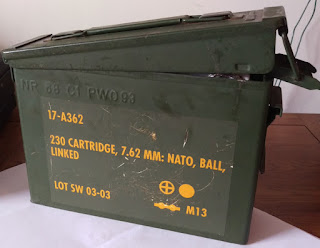 I purchased this ammo box from the local army surplus years ago, and it's only been used for storage, but it fits the bill nicely, it's fairly small in relation to the flight case I'd used before, has a handle for portability, and being metal should help dissipate the servers heat during use.

On top of all that, being an ammo tin, it fits the military/industrial aesthetic of Unreal well, but I wanted to do something to set it apart.

While I was planning this project, we were joking during our weekly games that we needed some kind of trophy that each weeks winner could keep on their desk, so I was looking at options for that, and I was toying with the idea of creating the iconic Unreal logo in brass, to create a shield-type trophy.

Then I figured we could combine the two ideas.


To start with I printed the logo to fit the 20x20cm brass that I ordered, and stuck the logo to the sheet to use as a template.

My original intent was to cut the brass on the bandsaw, but after a bit of testing, it was incredibly slow, and I found it easier to start by drilling around the logo, and then use a Dremel to cut out the shape by joining the holes together. From there it was just a case of grinding and filing down the edges.

The same process was used to cut a hole in the side of the ammo box for the window to be mounted, though as the metal was quite a bit thicker, I used an angle grinder for grinding down the edges.

The brass was glued and sandwiched between two sheets of clear acrylic, and mounted into the hole.


The original netbook that I used was too wide to fit the box, but I found another that just about fit - although I had to remove the screen, the battery, and pretty much anything else I could get away with ditching.

The next step was to add a band of WS2812 LEDs on the inside of the case, around the window, so that the logo could be backlit. To control them I used an Arduino Pro Micro, which I can in turn from the netbooks serial port. All the code will be covered in part 3.