In my last post I got the design and cap sorted for the trench lighter.

Sneak preview of the finished lighter

Most refillable lighters such as the Zippo refill from the bottom, but I didn't want to make unnecessary modifications to the case itself, so I decided to create a removable wick mechanism that would allow the neck to also be used for fuelling. 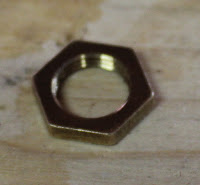 To do this I needed to create a screw thread in the neck.

I started with this, and using a grinder rounded off the outside diameter until it sit snug in the neck. Finally added some solder to secure it in place. 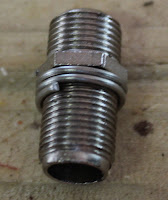 Then I took this F-F coaxial (satellite cable) adapter, and drilled out the plastic middle, leaving a hollow tube with threads on the outside that fit the lighter.
Some wool strands twisted together to create a wick and pulled through this creates the removable wick.


Also at this point I filled the lighter with some wool padding to for the lighter fuel to soak into.


This just leaves the ignition source. 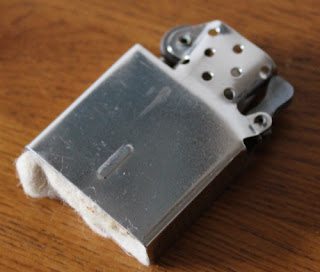 I still have the inner components of the lighter that I used for the screwdriver bit holder. The flint is long gone, but the wheel could still be useful, so I pulled it apart and took that. There was also a spring that is used to press the flint to the wheel, so I scavenged that too.


The assembly was constructed from a piece of a picture hook, which was widened to accept the width of the flint wheel.

A small hole was drilled and a hollow copper tube attached to the bottom, where the flint and spring was placed, and held in place with a small screw. (see below GIF for clearer explanation)


This assembly was fixed in place using another plumbing olive around the neck of the cartridge and secured again with epoxy.

The lighter in action

In Metro 2033 the main character, Artyom, carries a lighter fashioned from a bullet that can be used to light the way in dark areas and burn away obstacles such as cobwebs:

At a local country show I found an army surplus stand selling brass cartridge cases and saw an opportunity to make Artyoms lighter for real.

There is some real world history to this style of lighter. Known as a Trench lighter, items like this were quite common amongst troops in the trenches of the first World War, and relates to a wider concept of "Trench Art".


So with the case sorted, the next things to consider are:

I wanted to keep the lid of the lighter as a bullet style like in the game, but firearms law and lead content make the idea of using a real one infeasible and undesirable.

Instead I opted to grind the end of a copper bar down to a bullet shape, and hollow the inside slightly to make a cap.

Creating a hinge for the cap
The next stage is to create a hinge. A copper pipe clip was wrapped around the base of the cap, and secured with Araldite. 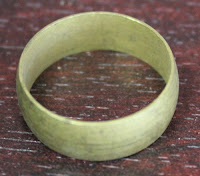 To attach this to the case, a brass olive from a pipe compression fitting (see pic.) was placed around the neck of the case, and the bottom half of the hinge was squeezed between it can the case to provide a frictional fit for now - it would later be further secured with epoxy.

Part two continues here
Posted by Anthony at 13:18 No comments: