If it wasn't for videogames, I'd probably never have got into the career path I have, and a lot of that also comes from my other habit of taking stuff apart to see how it works. 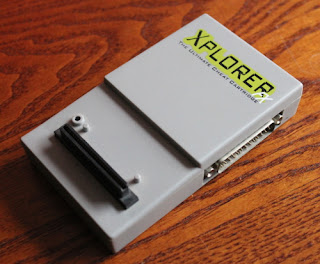 Back in the days of the original Playstation, I had one of these Xplorer cheat cartridges.

This allowed the use of game cheats that weren't necessarily part of the actual game code.

In addition, the cartridge allowed the user to create new codes, by essentially searching for values in an existing game.

My understanding of it is that it effectively was a memory scanner, that would find values in the systems RAM, and allowed values to be rewritten (constantly rewriting the memory location of the health variable to read 100% would effectively be an infinite health cheat, for example).

Similar application shave been released for PC games, but to be honest, they went to involve running unchecked code and tend to have an air of shadiness about them.

Plus they tend to just be a very directed tool for a specific game title, so blinding running one might help you out with a game, but you're not getting anything useful from it.

This project is to demonstrate that similar results can be produced using standard tools, which have uses beyond games, so while cheating at the game won't make you any good at the game, you might instead learn something that is useful in the real world.

Tools
The tool being used is a Hex Editor (wikipedia). I'm using GHex, but the most commonly known editor is WinHex for windows.

There are several approaches that can be taken, there are some who will painstakingly sit and work out the whole format of the file.

While this is probably the most technically sound approach, it's incredibly time consuming and laborious, particularly if you're only looking to change one or two values.

Another approach is to load a game, make a note of some key values in the game you'd like to amend - ammo, health, cash, etc. The more unique the value, then in theory the easier it will be to find in the file.

For this example we're using Saints Row 3, and in particular we're looking at ammo.

Note that there the process does involve a certain amount of trial and error, so for conciseness I'm not going to cover all of the missteps along the way, just what I did right. Of course it goes without saying making backups of the save before editing is worth doing just in case.

These are the ammo balances of the save I'm using:

The first thing to do is to convert some of these values to hexadecimal so that we know what to look for in the hex editor.

So starting with 265 - this converts to 109 in hex, or in the notation used with most hex editors, this will appear as "01 09", so use the find function in the hex editor to look for all instances of that. There are two likely outcomes, either:
As it happened, with the pistol ammo amount I lucked out, there was only the one instance.:


So, let's change these two bytes to FF (the largest 2-character hexadecimal value - like 99 is in decimal), reload the game, and see what happens.


So, where to go from here? We can repeat the above exercise with the other values to find them, but we can help to deduce the whereabouts by adding some logic to what we already know - in this instance, we're looking for ammo values, we've found one, and we can reason that it's quite likely that these values will be grouped together.

So lets test it and change all of those to "FF FF"
So did it work?

SR3 save file 'cheat flag'
Although it's not really in the spirit of this post, if you're here to just cheat at this one particular game, there's a byte in the save file that identifies if cheats were used in the game. It's the byte at 0x000000C8. You can play with cheats, then just change this flag to zero and it'll be as if you hadn't.


A final note on using cheats in games
Using cheats in games is obviously a polarising subject. I am very much opposed to using cheats in multiplayer games where doing so will affect the experience of others.
I am also generally opposed to using them in single player games - whether they're keycodes put in deliberately by the games developers or third party tools that you've just downloaded and ran.
In my opinion you should at least do a playthrough 'as the developers intended', however, they can be a good way of extending the re-playability of the game and getting more life out of your purchase afterwards, and by instead using techniques that I've covered in this post, you can learn and practise techniques that can be useful in the real world, and in my opinion the benefits of that outweigh the drawbacks.
Posted by Anthony at 06:16 2 comments: