Over the Christmas holidays our Beko Washer Dryer stopped working. It was fine for one cycle, and a couple of days later when we went to do another cycle, it just wouldn’t power on.

After checking the obvious things – fuses, sockets etc, I noticed that when first powered (at the wall), there’d be a faint beep – like the key-press beep, but much quieter.

The machine was pretty new, so the first port of call was see if it would be covered under warranty. It’s about 18 months old, so of course just out of warranty. I tried contacting the retailer anyway to see if there was any room for good will support. Of course there wasn’t – planned obsolescence is their business model, after all.

Some online research seemed to point to the mainboard being dead.
Hoping to get things resolved quickly, I found a replacement board and ordered it.

When it arrived the next day, it seemed slightly different to the original – the part number showed “G09” rather than the “G08” that was already installed. I also noticed that although the board layout was the same, some components were either added or removed.

Reasoning it to be a more up to date and optimised version of the same board, I swapped them out.
Booting it up, it seemed positive to begin with – it beeped, the display lit up, and all seemed well.
Everything seemed to work just fine… until I hit start, and nothing happened.

A local repairman who I spoke to advised me that sometimes these boards require ‘programming’ to work with a machine – which is something even he couldn’t help with, as only the manufacturers’ own contractors are able to do that. Basically, it’s like DRM (digital rights management) for washing machines.
Curiosity got the better of me, so I popped the PCB out of it’s enclosure to take a closer look.

On the other side, there was an Atmel ATMEGA – a family of microcontrollers that I’m quite familiar with. It got me wondering if I could dump the firmware from the old board, find what exactly is needed to get the new one working – my guess would be a serial number or other identifier baked in there that I might be able to transfer across to the new board.

However, when I was researching this board, I found another web page hidden away at WasherHelp. It's for a different model number, but I figured worth a shot. 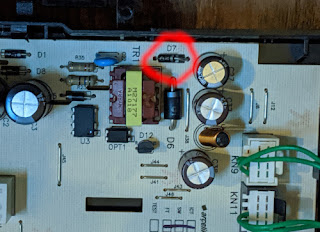 There was references to a diode on the board that failed – The one labelled D7 on the PCB. I checked on my board, and found that the same diode is dead on my board.

I de-soldered the diode from my board, an SR110 schottky diode, and started looking up alternatives. I found that the 1N4002 diode is similar specification, but is a regular diode, not schottky. This was bumping up on the limits of my electronics knowledge, so I asked a friend who has more professional electronics experience, and he told me it would probably be OK, but would likely run warmer and be less efficient.

I’m happy that I got this sorted, and hopefully will help others extend the life of their appliances. I’m a little disappointed though that I didn’t get a chance to mess with the microcontroller/firmware stuff though. Perhaps another appliance will give me a chance to explore another time.

Disclaimer: This is just what worked for me, and is in no way professional repair advice or instruction. If you decide to do something similar, remember that you, and you alone, are ultimately responsible for the outcome.