The first step was to join the slats together to create the boards that will form the sides of the chest.

As I don't have access to a planer/jointer this was a case of hand planing boards where necessary and being selective which boards matched together best.

In the absence of enough clamps I screwed the boards to a piece of scrap wood to hold them in place whilst the glue dried.


With the boards joined, I could get a better idea of how the panels would fit together.


The panels were too big to cut on my small tabletop saw, so I opted for handcut box joints.

I measured them so that the would line up with each of the slats on the long sides of the chest.

Cutting the curved top required some maths to match up the number of slats that would form the lid with the angle that would need to be cut in each slat to form a proper semi-circle.


Once these were cut I glued them and used a metal bar bent to a curve to temporarily screw them to as it was not possible to use a clamp.

The handles are simple bought. The hinges were standard trangular shaped hinges, but in order for them to work with the curve of the lid, I bent them to a curve by heating them with a heat-gun and a hammer.

Finding a suitable padlock was more difficult - sure, DIY stores sell padlocks, but I wanted something more old-fashioned looking to fit the "pirate chest" aesthetic. After quite a bit of searching I found this one at a car boot sale.

For finishing, I used the heat gun to heat the wood to the point where it started to brown (almost like toast), without burning. I thought about going the burn-and-sand method, but at this point I had invested enough time in the project that I didn't want to risk it.

Finally, the chest was finished with a coat of oil to help highlight the grain

At work we get through a lot of cans of soft drink, and an comment about incentivising recycling gave me the idea of making a can crusher. 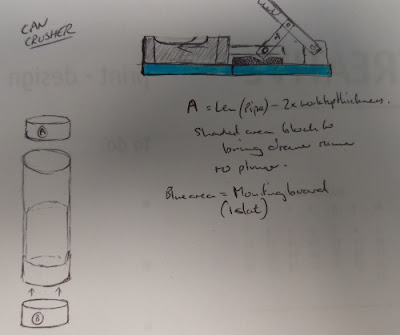 So I doodled up this sketch, and decided to set myself the goal of building it without leaving the workshop. 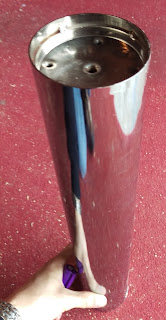 With my initial sketch I was envisaging using PVC pipe as the container for the can, but it turned out that I didn't have any. What I did manage to use instead was this metal tube - it was scrap from an old side table.

Cutting apart the tube was substantially trickier than PVC would've been though. The ends were cut off with a hacksaw, and the middle 'window' section where the can would be loaded was done with a Dremel, a file, and a lot of patience.

The two plugs that would form each end were cut from a scrap of kitchen counter top, cut by bandsaw and trimmed to create a tight fit for the base end, and slightly looser for the plunger end.

Building the rest of the frame was a fairly straightforward process, the plunger became a metal rod scavenged from an old wardrobe rail, and the frame from lengths of 1cm x 1cm wood.

Initial testing showed the wood wasn't quite strong enough on it's own and started to crack, so I took the whole thing apart and reinforced all the joints with metal u-channel.

In the end, the design works, but it's a lot bulkier than I'd originally hoped, and would be best suited to perhaps being mounted next to a recycling bin, or maybe a can vending machine - as the test video below shows, it's a bit wobbly when just free-standing.