I recently got a GoPro camera, primarily so that I can start using it to create more video content for this blog, but also from time-to-time I do driving track days, and would like to use the camera there as well.

On track days, a mechanical mount is required for any cameras mounted to the car (i.e., no suction cups to the windscreen). I wanted to capture some footage with my GoPro, so started searching around for in car mounts. The one I found mounted to the headrest, so that the camera sat at head level, between the driver and passenger seats. However, the price tag on it was ridiculous (£120+) for what is essentially a metal bar with a mount at the end. So I decided to make my own.

It centres around a length of square aluminium tube. I purchased a 500mm length online, expecting to need to cut it down a bit, but as it happens that length is ideal for my car, so I decided to leave it as-is.

The next step is to measure the position and diameter of the headrest poles. For this I just removed my passenger headrest and marked their position directly onto the tube.
The diameter calls for holes of 14mm.

Obviously, drills intended for metalwork would be preferable, but as aluminium is quite a soft metal, woodworking ones can be used in a pinch. I used a 14mm forstner drill to punch through the tube.


To secure the bar to the headrest, I designed and 3D printed the parts shown below

The idea being that once printed, they're split into 2, and fit into the aluminium tube, where they're secured with a bolt and locking nut so that they clamp against the headrest poles. On one side the bolt will be able to be loosened and slid away, to loosen the grip, allowing the mount to be removed.
A small amount of Sugru was also applied to the inside of the plastic mounts, to provide a 'grippier' surface against the headrest, and hopefully avoid it being scratched.


I tried using some designs for GoPro mounts that I found on Thingiverse, so save me having to reinvent the wheel, however the ones I tried didn't work too well, and snapped. I decided to use one of the mounts which came with the camera, have it fit in a 3D printed frame (see right)

The initial idea was to have this fit flush in the tube, with cut outs for the mount, and holes for the bolt to thread through. However, I instead ended up oversizing the 3D printed frame, and it fit tightly into the end of the tube, so I decided to leave it as-is, although opted to keep the bolt, just to ensure the 3D printed and original GoPro mount are securely together (they're a snug fit anyway, and the bolt is probably redundant, but I'd rather have the extra layer of protection). 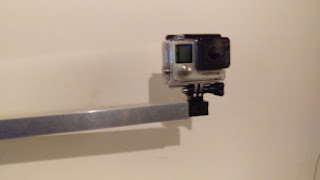 
SCAD code for the GoPro adapter

I found these old saws in my local scrap store for a quid. I've always been a fan of the old-fashioned aesthetic of wooden handles. So being just a quid, I thought I'd grab them, although I wasn't really sure what I wanted to do with them.


The Blades
The blades were very rusty, and I wasn't sure if they'd be salvageable. I was only really after the wooden handles anyway, but thought it'd be worth a shot restoring them.

One of the "old-wives tale"-type solutions for rust is white vinegar. I was sceptical, but it's a cheap option, so I gave it a shot, and it worked surprisingly well.

It takes some time, but takes little actual working time - I just set up the blades soaked in the vinegar (I found it easier to wrap the blades in kitchen roll/tissue paper and soaking that, rather than trying to find a suitably sized container).

I did that first thing in the morning, left them most of the day and later rinsed them off and scrubbed the blades. It got the worst off, but there was still a few spots of rust that remained. For that I used a wire brush.

The screws were brass, and cleaned up easily with Brasso.

The Handles
The handle of the tenon saw was in the worst state of the two - removing the blade revealed quite a large crack running from the near screw hole to the hand opening. During disassembly this caused a fragment to break away, but I was able to glue it back neatly with Superglue and it's not noticeable unless it's being looked for.

The flat sides of the handle I sanded with an orbital sander, but sanding the curved areas required a Dremel and a lot of patience.

Once sanded both handles were stained with a redwood stain, applied using a cloth rather than a brush (I find this highlights the natural woodgrain better).


Now they're restored, I'm still not entirely sure what to do with them. I have plenty of other saws, so it's not like I'll particularly need them for actual work, so I'll likely just use them for some artsy display or something in the workshop.

Side note: After removing all the rust, I discovered this faint engraving on the side of the tenon saw. It says PT2250, and appears hand-engraved.