A prank that's been doing the rounds in my office is that if you leave your car keys unattended on your desk, you can expect that your car probably won't be where you left it when you leave for the evening.

I've been kicking around ideas on how to improve on this gag, and at the same time defend my car from it happening to me.

My idea was to orchestrate a scenario of deliberately leaving my key for someone to try and move my car, and setting up a surprise for them when they get in. If I could make the car appear to be breaking down, would they own up thinking they broke the car, or just put the key back and deny all
knowledge?

So, what do we need to make it seem a car's breaking down? Noise and smoke.

The noise is quite simple, take a vibration motor from an Xbox/Playstation controller, wire it up and put it in a small container of screws & random bits of metal, so when it vibrates, we get a metallic rattle.

The smoke, not so easy. All the consumer smoke machines I could find required mains power, and would be far too bulky to conceal in the car, so I have to roll my own.


I purchased a few e-cigarette "Atomisers" from amazon and did some testing. See this post for a write up of how I wired up the eCigarette.


Unless there's a person 'drawing' on the device, the smoke cloud just sits there, so I'm going to need to create a pump or fan to force air through the atomiser. 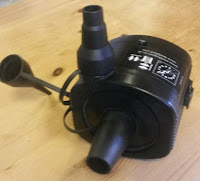 A quick test with some old computer fans that I had lying around showed that they weren't powerful enough, so I found a battery operated air-mattress pump that would do the trick.


The pump appears quite bulky, but it runs on 4 D Cell batteries. As we're not going to need those, a large proportion can be cut away, streamlining the whole thing.


To drive the motor of the pump, I'm going to use the same SN754410 that I'm using to power the e-Cigarette (this is why I used the SN754410 in the previous post, as it's capable of driving two motors, or in this case, one motor and one e-Cigarette.)

Testing this circuit turned out that 1 amp per 'motor' wasn't powerful enough to drive the pump, so I ended up putting the eCigarette coil and the pump motor in series, and joined the two motor channels of the SN754410 in parallel to double the available current. This isn't an ideal solution, as the resulting heat of the eCig coil is a bit excessive, but I only need it to work in short bursts, and I can control that from the micro.

Here is the first working test of the smoke machine:

As the pump makes enough noise, I decided that the vibration motor was a bit unnecessary, so left that off the final design. Essentially the device is a simple micro-controlled smoke-machine.