So it's the run up to Christmas, and at work we're having a desk decorating competition. This of course means lights, and an excuse for some colourful, blinky-type projects.

Most supermarkets are selling these battery operated chains of coloured LED lights for a couple of quid. They run off 3 AA batteries (4.5v) and are just static lights. 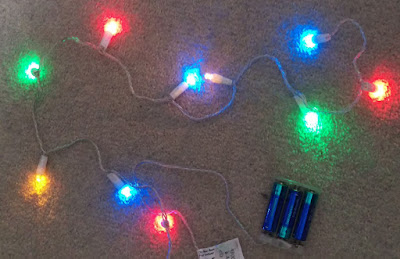 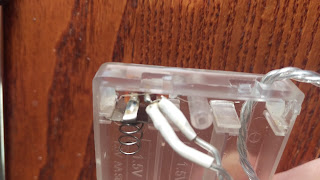 If you look closely there's actually 3 wires – this is likely because the different colour LEDs have different voltage drops. When I get to dismantling them later we'll know which are on which wire, but my guess is that red and orange are on one line, green and blue on the other. Turns out I was right.

My idea is very simple, wire an transistor onto each line so that they can be controlled independently, then connect a stereo jack to the base, with each channel (left/right) connecting to alternating transistors, so each audio channel will control one strand of lights. The principle is similar to the design I used on the space invaders alarm clock project, but instead of the alternating current being responsible for changing the colour, it'll be the audio channel.


The flickering of the lights works, but the frequency is very rapid, which seems to stop the LEDs reaching full brightness. Potentially this could be alleviated by adding capacitors to smooth out the switching, but as the effect varies quite drastically depending on audio source, it's not really an issue. The next challenge is finding a playlist that uses the lights to best effect!