Update
An unintentional (but useful) outcome of this project is that the connector used in this project is the same as the one used on Xbox 360 headsets, so this same device could be used to inject audio, such as a soundboard, into your in-game chat.

I got asked to build another phone audio interface for a colleague who spends a lot of time on the phone and wanted a way to play back pre-recorded audio to save repeating himself.

Unfortunately the existing one I build before is for traditional POTS (plain old telephone system), but the office uses VOIP phones.

I don't have a spare VOIP phone to mess with, so had to look at other options.

The phone has a headset port, using a 2.5mm jack socket, and the headsets plug has 3 rings. Given the the headsets themselves consist of just a microphone and earpiece, it stands to reason the pinouts are mic, speaker, and ground.

I don't have the actual pinout for this particular brand of headset, but I have worked with similar ones in the past and typically the tip is the microphone, ring is speaker, and base is ground. 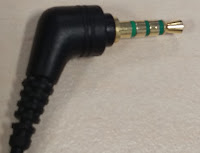 I don't have one of those connectors to hand, but found a stereo headset one from an old hands-free kit. That it has an additional ring connection (for the 2nd audio channel) doesn't matter, it'll effectively join up with ground anyway.

In addition to being able to inject audio into the call, we still need to be able to use the phone normally, so I've used an XBox 360 controllers headphone port to provide a passthrough for the phone headset.

Testing this circuit revealed a slight problem, having both the audio source and microphone connected resulted in the microphone becoming inaudibly quiet. In hindsight, this is likely due to the audio source being amplified and the mic not. A simple switch added to the circuit to allow quick switching fixed that.