A wire saw is piece of wire used for cutting. It's kind of like a band saw blade, except instead of having teeth, it cuts using abrasion - like a Dremel cutting disc does. It's a useful addition to the toolkit - it's one of those tools that might not see everyday use, but those times when you do need it, it more than pays for itself.

Most retail wire-saws tend to be aimed at the military / survivalist market, but I find mine most useful in trimming supports from 3D prints and cutting in hard to reach spots when dismantling electronics.

The great thing about wiresaws, is a lot of people will have one in their home, even without realising it. My wire saw is a string from a guitar.

The wound nickel creates the abrasive surface, being nickel it's quite resistant to the heat from the abrasion, and being a guitar string, is designed to withstand bending and flexing.

the downside to this, is they can be a pain to keep tidy. As they bend, they become more difficult to keep tidy.

So as a weekend project I made a simple case to store the wiresaw, helping to wind it neatly, yet keep it accessible.


As this was an off-the-cuff project, these measurements were not measurement by design, but what they ended up as after the fact, and are just there to give a rough indication of the sizes required.

I started with a 35mm length of dowel (10mm diameter). which i drilled two small holes through.


I grabbed a scrap piece of pine and cut a 20x35x55mm piece. I used a 20mm spade bit to drill partially into the 35mm side, and then used a 10mm drill to cut the rest of the way to the other side. 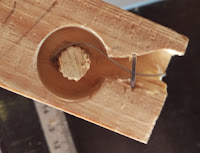 I used a router to carve out a groove from this hole to the short edge of the wood. There was a bit of tear out, but it doesn't affect it. The staple across the groove it there to act as a guide for the wire. I put the dowel in place, so that one of the drilled holes is on each side. 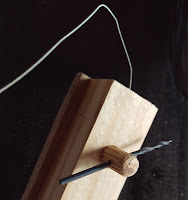 The drill bit was replaced with a loop of copper wire to provide a winding handle.

In an ideal world, this would have auto-retracted, like a tape measure, but some testing that I did showed that wasn't really practical.

Finally everything was trimmed to size and sanded down.