I was asked to create a sign for a wedding. They're planning on having Karaoke and wanted a sign pointing to the bar for "Dutch courage". 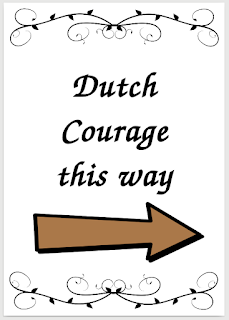 After exchanging a few ideas and a couple of preliminary sketches, we arrived at this design. Most of the graphics came from clipart, and the typeface is "URW Chancery L" in 132pt.


The overall size is  approximately a the size of an A3 piece of paper. As I don't have an A3 printer, I split the design across a few A4 sheets for printing.

Then came several hours of carving out the letters and patterns with a scalpel to create the stencil for later spray painting.

Building the sign
The sign is created from joining 3 lengths of up-cycled pallet wood. As with the Treasure Chest, the jointing was done manually with a combination of hand planing and simply finding lengths of wood that lined up well together.

The wood is glued together, and also there are cross beams on the back - one at the top and one at the bottom.

These also form the mount for the stand. 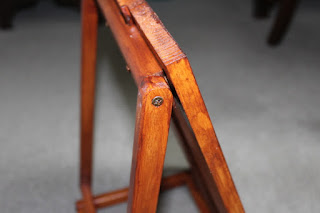 The wood for the stand same from an old garden parasol that I upcycled. As it's previous life was as an object that hinged at various points and was designed to be folded, it was ideally sized - all I needed was to cut down the lengths. The pivot is nothing fancy, just a single screw.

The entire sign was sanded, and stained with a teak wood stain. An early attempt at stencilling the sign didn't go well, so the front ended up being sanded and stained a second time.
This turned out to be a blessing in disguise as after the second coat the woodgrain was much more pronounced and looked much better for it.

The arrow
Maybe I'm just a cynic, but it crossed my mind that although the venue and location has already been set for the wedding, Murphy's Law suggests that when the wedding rolls round, things will have changed and the arrow will end up pointing the wrong way, so I came up with the idea of making it a magnetic stick-on arrow so it could be swapped around.


I cut the arrow on the bandsaw, and painted it white, then a cut a section of flat steel and epoxyed it to the back of the arrow.
Then in the place on the sign where the arrow was to be mounted, I used a forstner drill to drill 3 inlays. In each of these holes I epoxyed a circular magnet so that it sat flush with the face of the sign.


Painting
I taped the stencil to the face of the sign, and applied two coats of enamel white spray paint. Unfortunately the delicate patterns on the edge of the stencil didn't work too well with the spray, so once a couple of sprays were down to mark out the position of the design, I removed the stencil and started painting by hand. To do this I sprayed some of the paint into the cap, and used a thin brush.