This is far from an original project - Turns out "Plinko" was popularised by The Price is Right, but I only ever knew it from the drinking related version...

The premise is simple. There's a bottle opener at the top, a field of pins in the middle, and a number of boxes at the bottom. Bottle gets opened, bottle top falls into the field, bounces around the pins, and goes into one of the boxes at the bottom - these usually come with forfeits/suggestions like "Down it", "Take a shot" etc.

The grid was based off a template from a half inch isometric dots.

Use a bottle cap to measure which points should be used and mark them.
Spray glue the template(s) down to the backing board - don't forget to allow space at the top for the bottle opener itself. 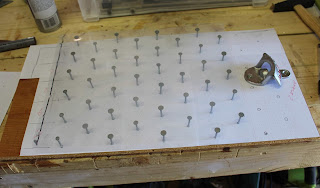 Simply place a nail at each point marked on the template, paying attention to keep the nail heights constant.


Once that's done, peel away the template and remove the nails.
Position the backing image as desired, and then replace the nails - you should be able to do this by feeling for the holes under the background image.

The edges are simply mitred and attached to the backing board with glue and brad nails. They had a rebate cut into them to hold the plastic/glass front.


The wood I used was chipboard from some old drawers, so the rebate was already there. I intended to sand down the wood, but in combination with the grey/blue paint I used, it gave a neat faux-concrete look which fit well with the Fallout/post-apocalyptic theme, so I decided to leave it.

The five 'buckets' at the bottom were just small scraps, painted and also attached to the backing with glues and brad nails.
The front is a bit of clear plastic I salvaged from a broken poster frame and cut to size.

Screw the bottle opener into place and all that's left is to decorate.

For the forfeit stickers I found some character images of Fallout characters online, and used the Monofonto font, which is similar to the font used in Fallout, and created the forfeits.
These were printed onto clear adhesive vinyl, cut out and stuck to the backing board. In hindsight they could've done with a lighter background to help them stand out (when working with transparencies, it's easy to forget that the white background won't necessarily be there in the end), but live and learn.
Posted by Anthony at 14:04