I had two new years resolutions this year - start posting here on a more regular schedule, and to start whittling down the pile of electronic junk that I'd accumulated over the years.

I've obviously failed the first one already, but to aid the second one I've set myself the challenge of using as much of the junk pile into projects as possible.

A pen plotter works kind of like a printer, but allows for any flat material to be printed on, and uses vectors to draw images - like a person drawing by hand, instead of rasters like a traditional printer.

The principle is simple, a basic 2-axis structure with a tool-end that allows for a marker/pen/pencil to be simply placed on or lifted off the paper.

The stepper motors, gears and drive belts, along with the steel structural rods and bushing were taken from a variety of old ink-jet printers and scanners. The limit switches and servo were either just in my components library or salvaged from old projects.

The supporting structure was 3D printed, having been designed in OpenSCAD - the SCAD source code can be found on GitHub. I'm not putting the files on Thingiverse as they're created to fit the random motors that I scavenged, so anyone else using the design would most likely need to alter the dimensions for their own motors.

The chipboard base has been up-cycled from an old flat-pack desk.

The first axis consists of two end mounts - one being a simple shape to support the ends of the steel bars (a wheel for the pulley was added manually after printing.)
The other end is a larger mount which contains a mounting point to secure the first stepper motor - obviously this was created bespoke to the stepper that I salvaged, but could easily be adapted in the SCAD file.

In the middle are two pieces which will form the carriage for the second axis. - they're similar to the first end piece, but also contain mounting points to secure the pulley.

The second axis builds off of the first, fitting between the two runners created as part of the first axis:

The two holes are the front are for the steel guide rods. The gap in the middle is a space for the limit switches to be attached to the carriage and the cutaway at the top is for the second axis' motor.
The two runners and this carriage are fixed together by plastic friction welding. 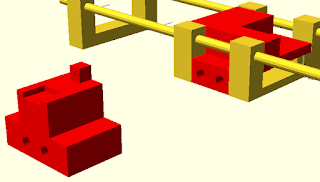 The motor/gear assembly that I'll be using for the second axis lifts the belt over the top of the first axis' rods, so the height of the end piece is made to match. The notch at the top accommodates the spring-loaded tensioner for the belt.

The carriage for the second axis is a simple block which contains the two limit switches for the axis, a servo and a bracket to mount the pulley to.

The final structural piece is a simple pen holder which connects to the arm of the servo.


The next part will cover the electronics and software.
Posted by Anthony at 13:00