The idea is that the fitting uses GU10 spotlight fittings like those typically recessed into ceilings.

However, instead of recessing them into the ceiling, they're recessed into a piece of live-edge wood, which is hung from the ceiling like a more traditional light fitting. 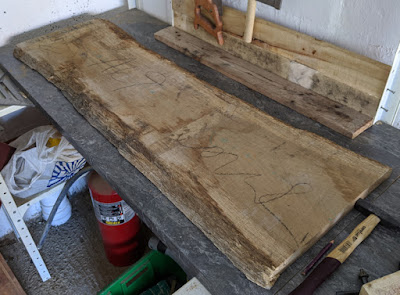 There's not much really in the way of woodwork in this project, just clean off bark and splintery bits from the live edge, preserving as much of the edge as possible.

Quite a bit of sanding was also needed to clear up the surfaces.

The end of the board I had was cleanly sawn which I thought detracted from the live edges, so I broke the corners down with a carving disc on an angle grinder.

Then measure the centre line. I started by taking the average width of the board and working from that, but there is some leeway - having both sides be live edge makes this near impossible to find a perfect centre line, but ultimately as long as it looks central to the naked eye.The spotlight fittings are not designed to go through the thickness of the board - after all, they're intended for plasterboard ceilings. While it won't affect the functioning of the light, it means that the spring loaded clips that latch. To work around this, I used a forstner drill to thin around the edge of the spotlight holes where the latch would sit - This is easier to do before the main spotlight hole is cut out, to stop the forstner bit from slipping.

Then I cut out the holes for the spotlights by drilling a pilot hole and widening with a jigsaw.

The three spotlights are wired in parallel, split across 2 junction boxes. Having them in parallel means that if one bulb was to fail, the others could continue to function. 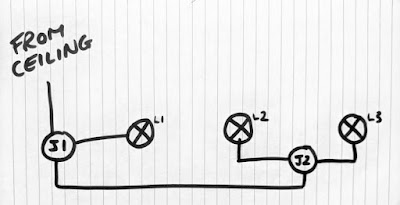 To make installing the light easier, the lead that connects from the ceiling to the wood itself included a 'kettle plug' style plug and socket, simply so that the wiring could be done on the workbench, and just plugged in at the time of installation.

The ceiling roses were purchased, and have simple hooks on them for hanging the chain.

Eyelet screws were attached in the back of the wood at each corner, from which the chain was attached.

Enough leeway was given on the chains so that adjustment could be made to ensure that the light hangs flat.