Even before Covid-19, people were already starting to talk about "work-life balance", and it's effect on health.

When Covid made working from home the norm, maintaining that balance became even harder, especially for those whose homes are more open-plan, meaning the same rooms they go to relax could end up also being where they go to work.

This project is aimed at exactly this problem.

During the day, the frame can be opened up, to reveal a pin-board where all the usual work notes and paperwork can be pinned, but once the working day is done, the frame can slide closed, shutting the metaphorical door on office life, leaving just the poster visible, more in fitting with a relaxed home lounge look.

This frame is more akin to a traditional frame, but as it will be the sliding component, and so not directly mounted to the wall, keeping the weight low is important.

As with the back frame, the joints are mitred half-lap. The same oak is used, but much thinner (roughly half inch). A rebate is cut in to seat the glass, poster and backing board.

With weight limitation in mind, thin perspex was used in place of glass. The rest of the frame is pretty standard - a sandwich of the perspex, the poster, backing card, and then hardboard (in this case, up-cycled panels from a hollow core door) all held in place with some pins.

The 'back' (pinboard) frame

To start with, this is a standard mitred half-lap jointed frame, albeit deeper than a normal frame - about an inch. It also does not have any rebate or groove, as it's not needed.

The pin board that I'm re-purposing is another of the same style I used for the desk organiser. It's smaller than the poster frame, but this is by design to allow room for the sliding mechanism.

The two long sides are removed. 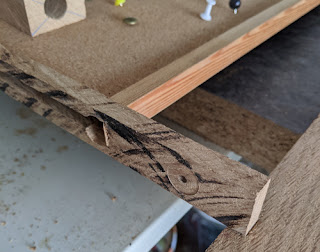 These are replaced with longer oak sides that attach it to the frame. On one side this is simply screwed into the larger frame, and on the other, small grooves are cut into the frame for it to fit into, similar to a tenon.

2 4x2" pieces of oak are drilled with a 20mm hole lengthways, and then glued in place at the top and bottom of the frame, filling this gap.

Then, the entire frame is cut lengthways, halfway through these pieces of oak, leaving 2" of it on either side. These will form the rails.

The 20mm hole is extended through the 'long side' part of the inner frame, at both ends. 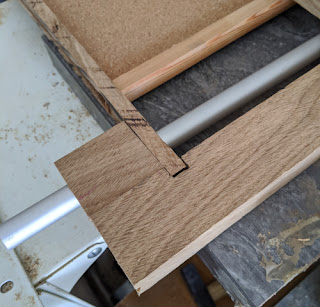 The 'thin' part of the frame - the one without the pin board attached, is the part of the back frame that the front frame will mount to, and be the part that slides out.

16mm aluminium tubing was inserted through each of the channels. On the thin side of the frame, a screw was driven perpendicular to the 20mm hole, fixing the tube in place and adding some support to the glued in block.

These two tubes are then threaded through the 'fat' part of the frame.

Screws from the back frame are driven through into the front frame on the left hand side (the 'thin' side).

To prevent sagging when the frame is opened, leather loops are attached around the other end of the tubing and screwed into the back of the front frame.

This makes the sliding part of the frame counterbalance it's own weight.

The whole thing was finished with a coat of danish oil, 4 angle brackets were added and it was mounted to the wall.