I got a dartboard for Christmas, which I have on the wall in my home office.

Darts is a great excuse for getting up and stretching your legs between video meetings, or while thinking over a problem, rather than just pacing back and forth.

However up until now it's simply had an old piece of hardboard as a backing, so thought it's time it got a proper cabinet.

The design is to have two compartments, the main dartboard cupboard (obviously!), and below that a small compartment which can be used as storage for the darts and accessories, and will open to provide a platform to help catch bounce-outs. 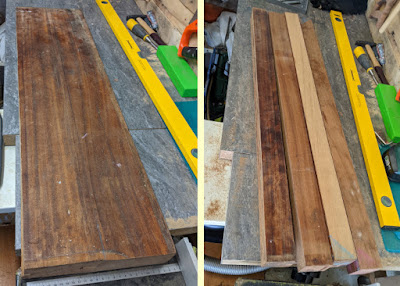 The frame is made from a reclaimed iroko desktop - I believe it was from an old school chemistry lab. It's about 5cm thick, so ideal for covering the thickness of the dartboard.

This was ripped down into 4 lengths to make the sides of the frame.

These are jointed using lapped mitre joints, screwed through from the back for extra support. 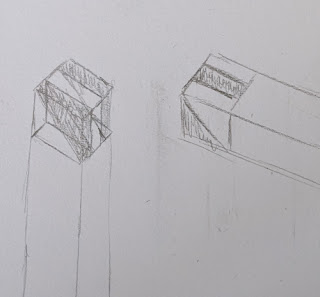 The divider between the main dartboard compartment and the lower storage compartment is joined into the sides with pocket screws.

I layered some cork over it, to try and prevent bounce-outs and reduce impact noise, although in hindsight I regret that decision, as the thin cork veneer seems to disintegrate at the slightest provocation. But seeing as it's there to catch errant darts, it's pretty much a consumable anyway.

The doors
The doors are iroko, edged with oak to add some contrast.

The fold down door for the storage compartment is reclaimed from a previous project which didn't pan out, and is already built in the same manner.

It also has a leather lining, again from a previous project - I don't know how well that's going to withstand some dart bounce-outs, but I don't think it's chances of surviving being ripped out are much better, so opted to leave it in. 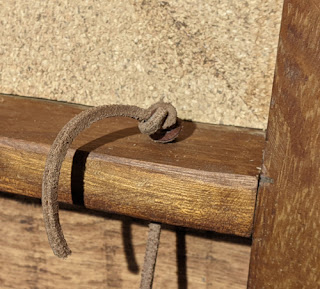 For the storage compartment, a leather lace is used to create a limiter to stop the door folding down too far. This simply threads through a hole drilled in the divider and is knotted. 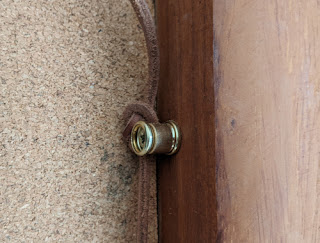 A simple latch for this is mounted in the side, made from miscellaneous brass hardware from the junk bin. 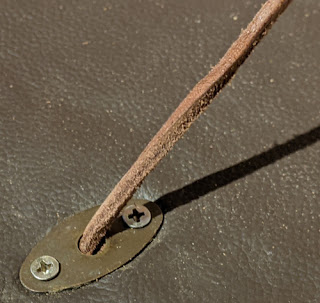 On the door side, the lace is threaded through more brass hardware (I believe a Chubb keyhole cover), and knotted. The knot is recessed into the door to hide it, and the hardware screwed to the door. 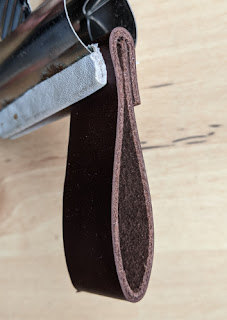 The handles for the doors are made of leather. This is done by creating a loop as shown below.

A hole is drilled through the thickest part (the 3-layer section). Between the second and third layer only, a small screw is placed with a washer.

The first and second layers are stitched together, and the handle screwed to the door. The hole in the first layer provides access for the screwdriver, as the head of the screw is hidden.

When that's done, the hole in the first layer is hidden by the rivet.

In the back of the cabinet, keyhole hooks were recessed into the top and bottom of the frame. The sides would've been preferable, but the placement on the wall would have collided with cabling behind the wall.

A whole was cut in the centre of the dartboard compartment, this is to allow the existing wall mount to pass through - so the dartboard does still have a direct mount to the wall, which aids with it's positioning on the wall - we can make use of the calculations we did when it was first hung.

Finally, a couple of coats of danish oil were applied to bring out the pattern of the grain.