Now that I've recently added a welder to my workshop, I need something a bit more protective than just the usual old clothes I use as workshop attire, so I've been planning to build a leather apron.

What makes this project a bit different though, is I have inherited a large box of leather from another leather crafter who sadly passed away. It's a significant amount of material, so I don't really want to go purchasing yet more for this project.

So the challenge that I set myself is to 'frankenstein' the apron together from the smaller pieces, but do so in a way that hides that fact - or at the very least, styles it out so it doesn't look like a patchwork bodge.

I'm using a borrowed canvas apron as a rough template, but will adapt where necessary to suit me. 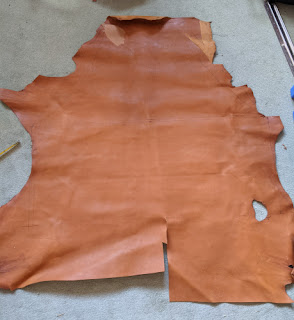 The largest suitable piece I have is this, which covers most of the area, but the template comes in a bit short at the edges. 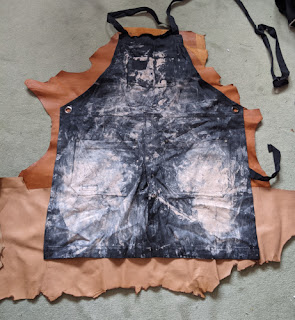 A second piece, although a different colour can attach to the bottom, extending it to a more suitable length. This covers the size of the canvas example apron. 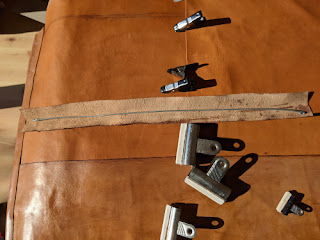 I also created edge pieces for the vertical sides of the apron, to tidy it up.
When I've used aprons in the past, I've always found an annoyance of them is how the side bits often 'flap about'. To try and combat this in this design, I've enclosed a length of steel wire in there, which should strike a balance of being flexible enough yet maintaining some sense of shape.

There's still the scuffed portion at the top to deal with. This will be where I affix the straps, so have cut a couple smaller pieces of thicker leather here so which cover the problematic patch, and provide the mounting point for the strap. I did the same on both sides to maintain the symmetry.

There was also enough left over to add a central pocket, which I planned to divide into two. 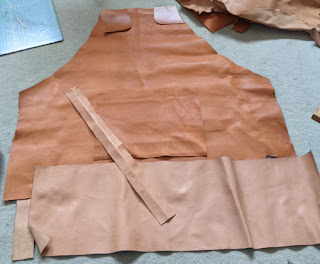 I wanted all the pieces to be a consistent colour, but not too dark, so I opted for a shade of brown just slightly darker than the pieces were currently.

After dyeing, I fixed the bottom and side sections in place with contact adhesive. This would serve as a placeholder while I stitched them, and add to the overall strength. 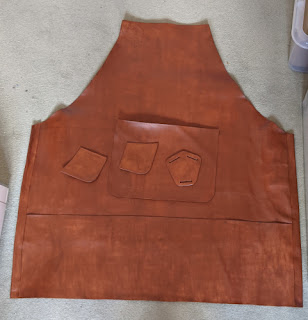 In the box of leather that I inherited, there were what appear to be, a number of several unfinished belts. These were all consistent in the type of leather, so were perfect to repurpose as straps for the apron. All I needed do is dye them to match the colour.

For the shoulder straps I used a single rivet, as this would also act like a pivot and allow flexibility. This was covered over by the top pieces I mentioned earlier. 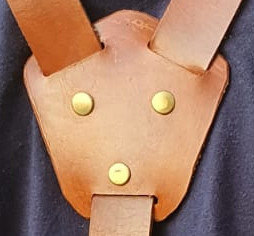 I joined these in the middle of the back using a small piece cut from thick leather, from which another piece moves downward to join the belt portion, like a 'Y' shape. 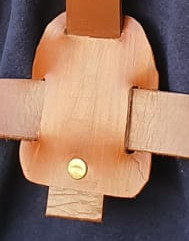 Another 'junction' piece joins that to the belt in an 'upside-down T' shape.

The belt itself is simply riveted to the sides of the apron. I made the right-hand side particularly for the buckle, as I reasoned it would be easier to fasten/unfasten from the side of the body than trying to reach behind my back.

I soon realised that the front pocket would just end up filling with dust, so I made a cover flap for that.

Also used some remaining scraps to add some padding to the straps near the shoulder.