Following on from the pen and pencil projects I figured I'd continue on with the stationery theme.

Like most people who've ever taken notes, I have a lot of half-used notebooks gathering dust, leaving a large stockpile of perfectly good paper not getting used simply because it's bound to some other paper that did.

I'd been thinking about trying a book-binding type project anyway, so figured why not save a few steps and do some up-cycling in the process.


These are great candidates because they are only bound by 2 staples and each book is a single stack of folded paper.

There's a detailed Instructable for this, which I used heavily for this project, so rather than reinvent the wheel, I'm only going to detail the areas where my process differed from theirs.

To start with, I removed the covers from 4 of the blue books.

To get the fabric for the binding, an old t-shirt was sacrificed.

I oversized the measurements for this bit, so that I could pin the fabric to a scrap backing board, to hold it taut while I mounted the folios.

I put clips each end of the stack of paper, painted some PVA glue onto the fabric, and then added the spines of the paper. Doing it this way around prevents the glue leaking between the pages and fixing them together. 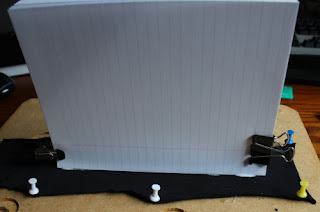 The resulting object was surprisingly stable enough to move somewhere safe to dry.


In the meantime I started preparing the cover as per the instructables instructions. However the leather that I had for the cover was slightly too narrow to have the one inch border that it instructs, but still have enough material to wrap around, so I'd be working with narrower margins. 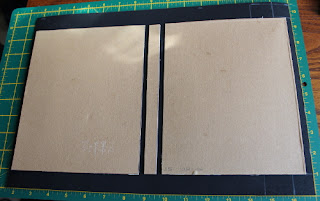 In addition, in order to be able to fold the leather over to create a neat edge, it needs to be thinned. I did this using a combination of skiving tool and sanding, to thin the material around the border.

After that it was just a case of following the rest of the instructable. For the lining paper I used some of the card I had left over from the Picture Frame that I did a while back.

To finish it off I added some brass corners, and that was it. Not perfect by any means, but very happy with it as a first attempt.