The plan for the firepit was scuppered by unavailability of materials due to Covid, so we had to rewind and reformulate the plan.

For the most part, the patio plan came together well, but we had use more slabs from the shed side for the base layer than we thought, because the greenhouse itself was cemented into the ground by metal supports, and not sat on a slab base as initially thought.

This in turn meant we were two slabs shy of what we needed, but we were able to source some that were close enough in appearance. 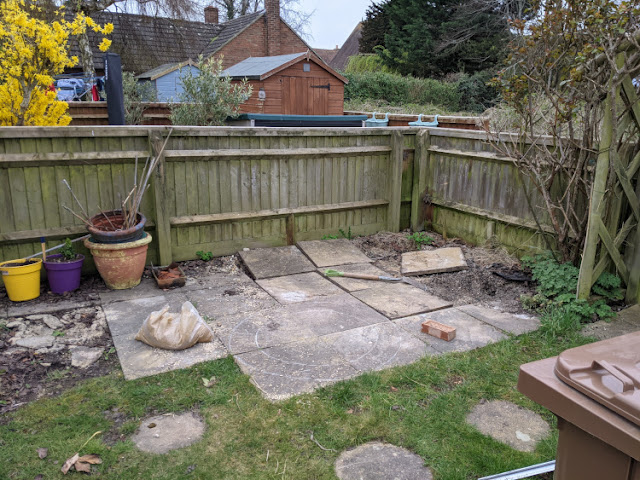 When it came to placing the concrete blocks, we realised we could use fewer than estimated by spacing them out differently, which gave us a spare at the end. It also allowed for us to dispose of hard rubble by using as filler between the blocks, and also allowed us to create airflow from the back of the patio to the firepit, which should help aid combustion. 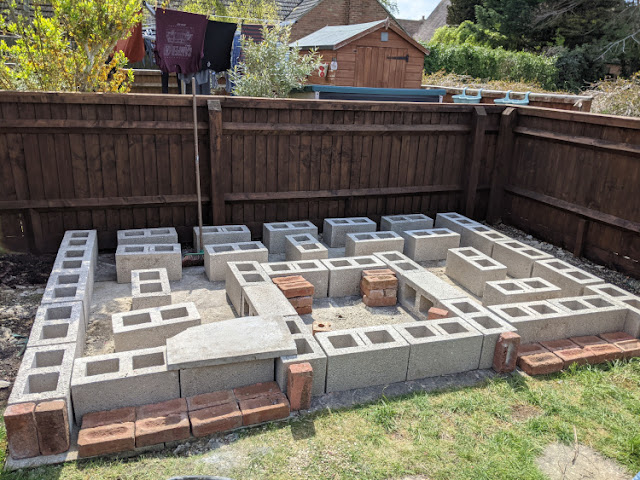 When researching the best materials to use in a fire pit, a few things became obvious.

Therefore it seemed to me that the best course of action would be to use a material that is hard-wearing, but also fairly cheap and readily available, so that if the internet pessimists turn out to be right, it can easily be replaced.

For that reason I chose regular house brick as the lining wall. This wall should take the brunt of the heat, meaning I could use a more decorative stone for the outside.

A mix of brick sizes was used for the outer wall, both for aesthetic effect and it also helped fit the available space better.

The wall was topped off with white coping slabs with a mitre. The inner wall sticks out slightly from the coping, giving it a 'lip'. This is by design and will feed into a later project.