When working on the patio and fire pit, I took on the challenge of 'zero-ish' waste - not having any more waste than could fit in the regular household bins. No skips, special collections etc.

On the opposite side to where the fire pit was built, there was an old shed, which wasn't in bad condition, but was unwanted.

It was taken down so that we could make use of the paving slabs which were being used as it's base. 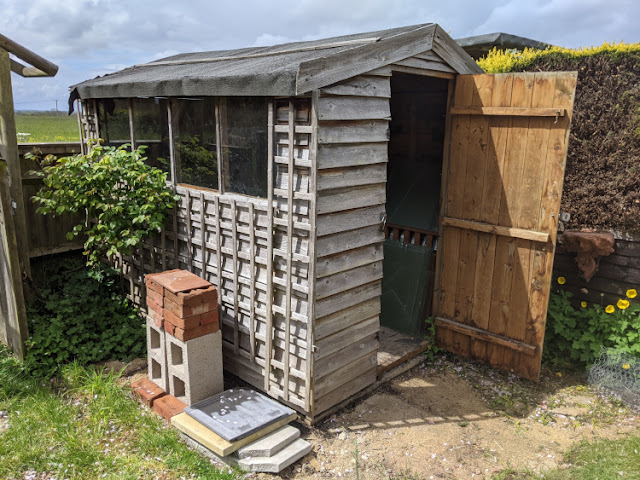 Along the side of where the raised patio was being built, there was a gap which used to have long-dead roses in - the area marked in brown in the patio-plan model below

Just eye-balling it, I could see that the length of the shed (approx 8 feet), was about the same, and came up with the idea of using the sides to create a raised planter there.

It also helped the zero-ish waste plan, as the planter would provide space for re-homing soil removed during the fire pit and patio builds, as it could be filled up from ground-level

The frame was simple, just the four sides simply screwed together - leaving the bottom open for drainage.

The front panel was cut down from the front of the shed (below the windows), and the back of the planter was one of the roof panels of the shed. The sides were the other roof panel, cut lengthways.

The back of the planter is higher than the front - I considered cutting it down, but it does provide some utility in that it gives a place to mount things like chicken wire/frost protection/cold frames over the top of the plants if need be, and as it is still lower than the fence itself, I decided to leave it alone.

And finally some miscellaneous bits of shed timber was used to add trim to the top of the panels, which also served to pin the plastic liner in place.

The wood was treated with normal fence stain/wood preservative.

The insides of the frame are lined with plastic sheet (which as it happens, is also up-cycled from some packaging.) and stood on some slab offcuts to protect the wood from moisture caused by contact with the wet soil. 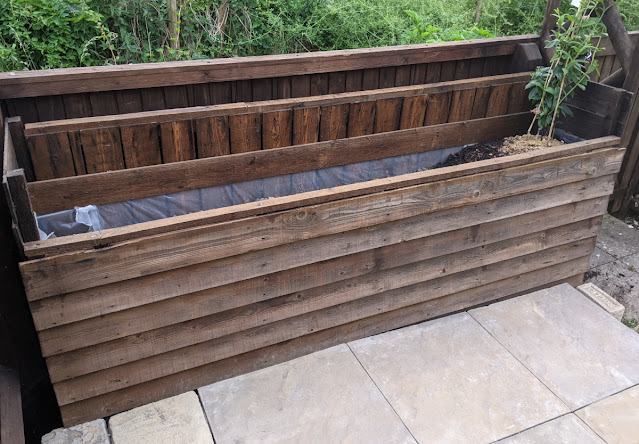