A couple of months have passed quickly by and the November and December repair cafes have been and gone.

To start with there was a jammed paper shredder. Having taken it apart we found that the jam had caused the motor to flatten the teeth of one of the gears. Given the lack of available replacement parts, it seems like it's not going to be repairable.

The next item was an oscillating sander that wouldn't turn on. An initial suspicion of the motor brushes being worn was scuppered when the screw terminal on the PCB that connected the main cable, fell away during disassembly. It looked like the pins had just corroded through. There was enough left of the pins that it was possible to scrape the corrosion away and re-solder the connector. 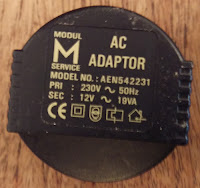 Third up was a lamp. The issue became obvious when unpacking it, as one of the pins fell of the mains plug. The power adapter was disassembled, but turned out not to be salvageable. However a replacement shouldn't be too hard to find.

Finally a Technics Hi-Fi received was brought in with reports of the radio not working, and volume dropping intermittently. There was no obvious way to replicate the problem, but it did seem that the radio might have been badly tuned, and some cycling of the volume control seemed to sort the volume issues. Given that nothing was particularly done, yet the problem seemed to go away, it's hard to class it as a win or a loss.

I managed to find a replacement power adapter for the lamp that was brought in last month, so was able to turn that into a quick win. 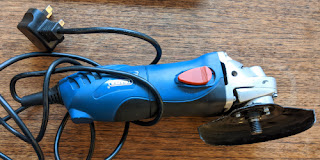 Second up was a dumpster-dived angle grinder that was just not powering on.
After checking the usual electrical culprits it was a case of the plastic switch being decoupled from the actual electrical switch - all it required required being clipped back into place. Unfortunately the nut that holds the disc in place was gone, but I'm sure a spare can be found in time for next time.

Unsurprisingly, there was a set of Christmas lights. Unfortunately not salvageable as it looked like there'd been an attempt to glue the bulbs in place. 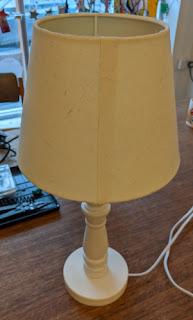 Finally, a family brought in three lamps - I took two of them, one of the volunteers took the other. The first of mine was just a fuse replacement - easy win.
The second was also a fuse replacement, but it wasn't the plug fuse, it was a smaller device fuse on the circuit board of the lamp. With no replacement available, all we could do was advise them of the fuse that was needed and I showed them how to replace it.