After finishing the upcycled planter by the firepit, I realised that something similar would be useful as a wood store for the firepit, and would also help define a boundary to the patio and fire pit area.

Looking through the remaining timber from the shed, there was still the shed floor, and the second long wall to use, and the short (back) wall

These formed the back and front of the second planter, with the back wall being split into 2 lengths to provide the sides, in mostly matching dimensions to the first planter.

To help keep the wood dry, the shed door and it's hinges were repurposed. The thing is, the planter is around 8 foot long, and the door only 6. 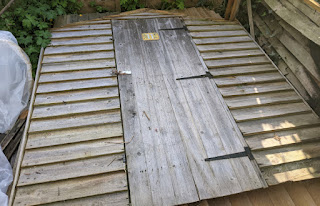 To overcome this, it's split into 2 sections, with a divider made from part of the shed front. The 6 foot section with the lid is the woodstore, and the remaining 2 foot section was lined out with plastic to create another planter, in the same manner as the first planter.

The idea is that this will house climbing plants to grow along the trellis that has been installed on the fence at the back of the patio.

The door had to be trimmed down as the planter was narrower, and the hinges had to be switched to the opposite side. A bit of scrap chain (left over from the light fitting project), and an odd carabiner clip I had lying around, were looped around the tree to provide a latch to hold the lid open when needed. 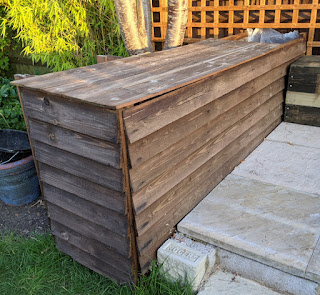 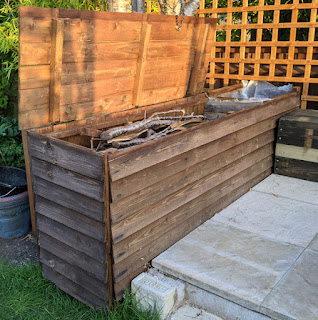 That was meant for making planters. But, when I set out with all these garden builds, I did set a 'zero-ish' waste rule. And when the bricks were delivered, they came in a wooden crate, which would then need disposing of. 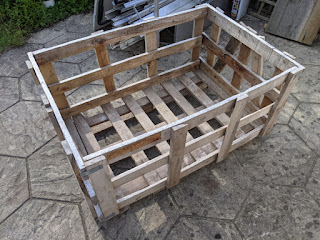 Plus there were a few miscellaneous bits of shed panel left, which were otherwise just going to be firewood.

So I quickly whipped up a third mini-planter to go out on the front lawn. It's pretty rough and ready, but will serve it's purpose, at least for now and until I have more definite plans of the work I want to do out front.